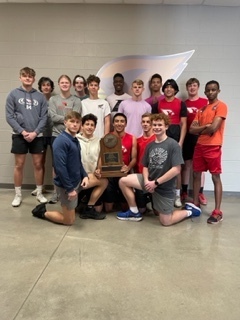 For the first time in school history, the Farmington Men's Track team finished runner-up in the 4A division of the Arkansas State Indoor Championships held at the Tyson Track Facility at the University of Arkansas last Saturday night. Nine 4A schools were represented at this event from across the state.

Coach Mattingly said, "This was a tremendous start to this year's track season. We are trying to establish a culture of winning in track in Farmington. This runner-up finish will be a reminder to our kids that we can compete at the state level if we put the time and effort in."